As a result, different materials and surface finishes in combination with different light sources, whether artifical or natural, can make colours appear different. In the same way, the colour of two samples can appear the same under one light but different under another – known as a metameric failure or more accurately, an illuminant metameric failure.

Finally, a field-size metameric failure can occur because the relative proportions of the three cone types in the retina vary from the centre of the visual field to the periphery, so that colours which match when viewed as very small, centrally fixated areas may appear different when presented as large colour areas. 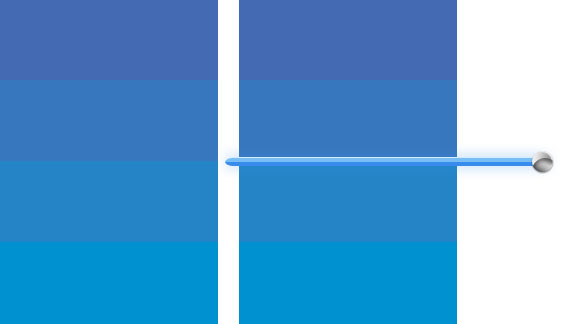 You will notice from the same colour stack on the right that when a divider obscures the joint between two colours, then the difference is eliminated and the colours appear the same.

When colour matching to a sample, it is important for the customer to understand the possibility of metameric failure. To achieve the best possible results, Asia Poly’s colour lab need to know details of the product in its final application. Armed with this information, any colour match can be compared under the correct conditions.

© A-Cast is a trademark of Asia Poly Industrial Sdn Bhd. All Rights Reserved.

Crafted with meraki by CrowdedTent